Fun, Games and Pizza for a Night in the Library

‘Twas a few nights before Christmas, when all through the house, not a creature was stirring… not even a mouse!

Well 16 pupils from Year 8, 9 and 10 may have stirred just a little bit when they took part in the Night in the Library sleepover on Friday 11 December.

A Night in the Library was the idea of Rye St Antony Librarian, Florence Benfeghoul who held the first sleepover last year, ably assisted by Assistant Librarian Cheryl Birdseye. The event was such a success, they decided to make it an annual occasion.

The evening began with a meal of pizzas, followed by marshmallows toasted on an open fire outside. The participants also enjoyed hot chocolate with whipped cream.

This was followed by some fun and games including Chinese Whispers on the theme of book titles. The evening culminated in a showing of the film, Pirates of the Caribbean, in Rendall Hall.

The dress code was pyjamas and onesies and pupils set up their ‘bedrooms’ within the alcoves of bookcases.

Eventually ‘not a creature was stirring’ but it took a while for all the excitement to die down.

Great fun was had by all and plans are already underway to hold A Night in the Library next year. 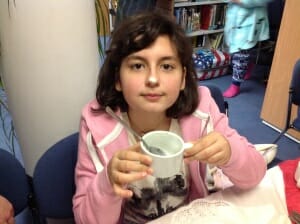 Rye St Antony, Oxford – Bringing Our School to your Home

We are pleased to be able to offer bespoke virtual tours and meetings to interested families at this time.